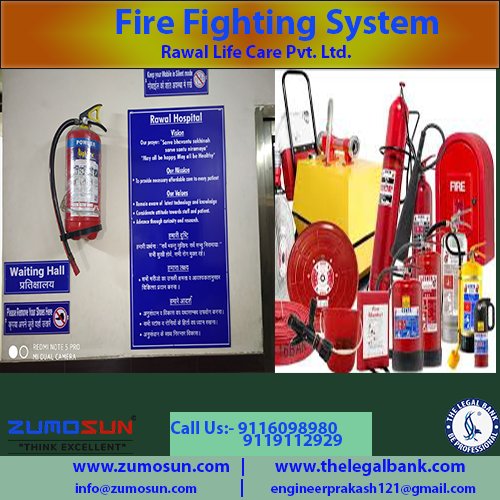 Fire fighting systems and equipment vary depending on the age, size, use and type of building construction. A building may contain some or all of the following features:

Fire extinguishers are provided for a 'first attack' fire fighting measure, generally undertaken by the occupants of the building before the fire service arrives. It is important that occupants are familiar with which extinguisher type to use on which fire.

Most fires start as a small fire and may be extinguished if the correct type and amount of extinguishing agent is applied whilst the fire is small and controllable.

Fire extinguisher locations must be clearly identified. Extinguishers are colour coded according to the extinguishing agent.

It is the policy of the Community Safety and Resilience Department that fire extinguishers be logically grouped at exits from the building, so that occupants first go to the exit and then return to fight the fire, knowing that a safe exit lies behind them, away from the fire. In some instances this will be at odds with the prescriptive requirements of Australian Standard AS2444 Portable fire extinguishers and fire blankets - Selection and location, which simply specifies a distance of travel to a fire extinguisher rather than their location in relation to escape paths. Blind compliance with the standard has the potential to place the fire between the occupant and the safe escape path.

Fire hose reels are provided for use by occupants as a 'first attack' fire fighting measure but may, in some instances, also be used by firefighters.

Because hose reels are generally located next to an exit, in an emergency it is possible to reach a safe place simply by following the hose.

In South Australia, a unique floor mounted swivel hose guide is often employed which lays the hose at floor level, prior to being dragged by the operator. In practice for a single person, this makes withdrawal of the hose much easier than does the traditional high level swinging arm hose guide.

Fire hydrant systems are installed in buildings to help firefighters quickly attack the fire. Essentially, a hydrant system is a water reticulation system used to transport water in order to limit the amount of hose that firefighters have to lay, thus speeding up the fire fighting process.

Fire hydrants are for the sole use of trained firefighters (which includes factory fire fighting teams). Because of the high pressures available serious injury can occur if untrained persons attempt to operate the equipment connected to such installations.

Fire hydrant systems sometimes include ancillary parts essential to their effective operation such as pumps, tanks and fire service booster connections. These systems must be maintained and regularly tested if they are to be effective when needed.

The placement of such equipment needs to closely interface with fire service operational procedure; simply complying with deemed to satisfy code provisions is a potential recipe for disaster. For any advice regarding these systems, old or new, please ask the intended users; contact the Community Safety and Resilience Department.

Time is essential in the control of fire. Automatic sprinkler systems are one of the most reliable methods available for controlling fires. Today's automatic fire sprinkler systems offer state of the art protection of life and property from the effects of fire. Sprinkler heads are now available which are twenty times more sensitive to fire than they were ten years ago.

A sprinkler head is really an automatic (open once only) tap. The sprinkler head is connected to a pressurised water system. When the fire heats up the sprinkler head, it opens at a pre-set temperature, thus allowing pressurised water to be sprayed both down onto the fire and also up to cool the hot smoky layer and the building structure above the fire. This spray also wets combustible material in the vicinity of the fire, making it difficult to ignite, thereby slowing down or preventing fire spread and growth.

When a sprinkler head operates, the water pressure in the system drops, activating an alarm which often automatically calls the fire service via a telephone connection.

Some people say sprinklers cause a lot of water damage. As has been explained, only those sprinkler heads heated by the fire operate; all sprinklers in a building do not operate at once. Usually non-fire water damage only occurs if the occupants carelessly damage the system. Firefighters use much more water than a sprinkler system. The combined damage from a fire and the water used by firefighters dramatically exceeds that likely from a properly installed sprinkler system.

Because, historically, complete extinguishment of fires has not been achieved, it is traditional to consider that sprinklers only control fire growth until intervention occurs by the fire service. Today, some sprinkler systems are designed for early suppression and are considered to have failed if they do not extinguish the fire.

Sprinkler systems are usually installed in high or large buildings and high fire hazard occupancies. Statistics show that in a majority of cases where sprinklers are installed the fire has been controlled by one sprinkler head alone.

For further discussion or advice on these issues, please contact the Community Safety and Resilience Department.

The following documents are recommended further reading for guidance and information: