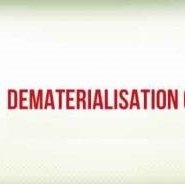 Procedure for ISIN Generation in NSDl/CDSL and Dematerialization of Securities.

ISIN GENERATION AND DEMATERIALISATION OF SECURITY

As per the MCA Circular dated 10th of September 2018 and Companies ( Prospectus And Allotment of Securities) Third Amendment rules 2018,  Every unlisted public  shall

In accordance with provisions of the Depository Act, 1996 and regulation made thereunder.

Dematerialization means the conversion of physical shares into electronic form, it removes the risk of loss, theft, or misplaced of the Share Certificate.

Step-1 Decide on depository where the ISIN is to be generated (i.e. NSDL and/or CDSL). The decision depends on where the shareholders have Demat accounts.

Step-2 for ISIN Generation, prepare the documentation needed and give them to RTA for onward submission to the respective depository.

Step-3 If shareholders don’t have Demat accounts, identify a suitable Depository Participant (DP) for the opening of a Demat account (The Demat account opening activity can be carried out simultaneously with ISIN generation activity)

Step-4 Once ISIN is generated; give the shareholder’s database with Specimen signatures to the RTA for updating in their system.

Inform all the shareholders to get in touch with their DP’s and submit the Demat Request Form (DRF) with their KYC documents and original Share Certificates.

Step-5 DP’s will send the DRF’s with KYC documents and share certificates to the RTA for the conversion of their physical shares into Demat shares.