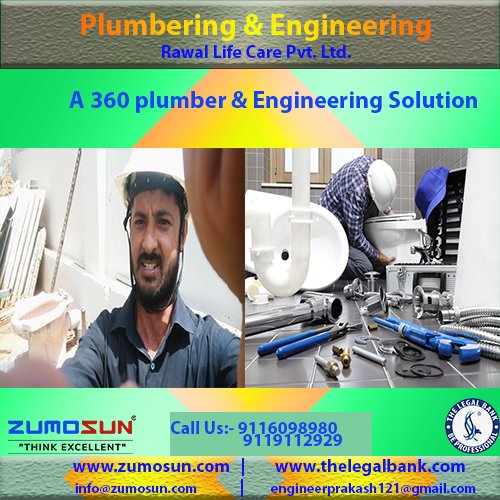 Plumbing, system of pipes and fixtures installed in a building for the distribution and use of potable (drinkable) water and the removal of waterborne wastes. It is usually distinguished from water and sewage systems that serve a group of buildings or a city.

One of the problems of every civilization in which the population has been centralized in cities and towns has been the development of adequate plumbing systems. In certain parts of Europe the complex aqueducts built by the Romans to supply their cities with potable water can still be seen. However, the early systems built for the disposal of human wastes were less elaborate. Human wastes were often transported from the cities in carts or buckets or else discharged into an open, water-filled system of ditches that led from the city to a lake or stream.

Improvement in plumbing systems was very slow. Virtually no progress was made from the time of the Romans until the 19th century. The relatively primitive sanitation facilities were inadequate for the large, crowded population centres that sprang up during the Industrial Revolution, and outbreaks of typhoid fever and dysentery were often spread by the consumption of water contaminated with human wastes. Eventually these epidemics were curbed by the development of separate, underground water and sewage systems, which eliminated open sewage ditches. In addition, plumbing fixtures were designed to handle potable water and water-borne wastes within buildings.

The water-carrying pipes and other materials used in a plumbing system must be strong, noncorrosive, and durable enough to equal or exceed the expected life of the building in which they are installed. Toilets, urinals, and lavatories usually are made of stable porcelain or vitreous china, although they sometimes are made of glazed cast iron, steel, or stainless steel. Ordinary water pipes usually are made of steel, copper, brass, plastic, or other nontoxic material; and the most common materials for sewage pipes are cast iron, steel, copper, and asbestos cement.

Methods of water distribution vary. For towns and cities, municipally or privately owned water companies treat and purify water collected from wells, lakes, rivers, and ponds and distribute it to individual buildings. In rural areas water is commonly obtained directly from individual wells.

In most cities, water is forced through the distribution system by pumps, although, in rare instances, when the source of water is located in mountains or hills above a city, the pressure generated by gravity is sufficient to distribute water throughout the system. In other cases, water is pumped from the collection and purification facilities into elevated storage tanks and then allowed to flow throughout the system by gravity. But in most municipalities water is pumped directly through the system; elevated storage tanks may also be provided to serve as pressure-stabilization devices and as an auxiliary source in the event of pump failure or of a catastrophe, such as fire, that might require more water than the pumps or the water source are able to supply.

The pressure developed in the water-supply system and the friction generated by the water moving through the pipes are the two factors that limit both the height to which water can be distributed and the maximum flow rate available at any point in the system.

Sanitary fixture traps provide a water seal between the sewer pipes and the rooms in which plumbing fixtures are installed. The most commonly used sanitary trap is a U bend, or dip, installed in the drainpipe adjacent to the outlet of each fixture. A portion of the waste water discharged by the fixture is retained in the U, forming a seal that separates the fixture from the open drainpipes.

We are designed, deployed and developed an excellent mechanism for growth & success of Public Issue-(IPO) Trading Cloud platform

We are designed, deployed and developed an excellent mechanism for growth & success of Virtual Currencies Trading Cloud platform

We are designed, deployed and developed an excellent mechanism for growth & success of Emerge Trading Cloud platform

We are designed, deployed and developed an excellent mechanism for growth & success of Fixed Income & Debit Trading Cloud platform

We are designed, deployed and developed an excellent mechanism for growth & success of Derivatives Trading Cloud platform